Ladies and Gentlemen
Welcome to the Globe Theatre
Today I have the honour
To present to you
The major masterpiece
By William Shakespeare
Romeo and Juliet
Let the show begin!
Here come the Lord’s Chamberlain Men

On the other side of a little curtain, the great Elizabethan theatre stands: fanfares, drums, thunderous applauses are warning the performance is about to begin.

This is a huge red dot on Mary’s agenda, you know? Right so! She is Mr Charles Goodwin’s seamstress `jackie` of all trades, and — it was about time!, she, too, will wear a costume and enter the stage! Sure, her face will not be visible, she will only be allowed to assume the role of a silent friar. Hooded head to toes her `job` will be to settle a little tree in order for the audience to understand the set has shifted into a forest. That’s already a lot, though, isn’t it? Everyone knows women cannot act. Devil’s business! The Puritans are super-strict.

She is fine as so, though. On this side of Sir William Shakespeare’s great theatre she is the minor queen of a kingdom of imagination and `action` and a great deal must be done: stage dress, do hair, make up, for the greatest young actor ever seen under Queen Elizabeth’s `theatrical` reign; and tonight he will be interpreting the role of Juliet. Sure, quite a sad story this one, but Master Shakespeare, it’s known, he is unpredictable! As when he invented the story of the donkey, or the one of the skull. She has fun Mary — silly girl!, in her minor realm. She preserves of it the chaotic order, and can find anything in there: wigs, little shoes, trinkets, mannequins, swords, face powder. Even tea pot and cups!

She imagines having tea with the Queen herself — it is said it takes hours to make her white, that is to cover smallpox marks, and the greatest playwright of England, what now? — silly girl!, of the whole world. That’s right! She imagines an encounter for tea between Elizabeth and `Willy` — that is how Mr Goodwin calls him. Thus, all of a sudden, she is the one who becomes a playwright, and a doll maker too, of a couple of images at the core of a child-friendly Elizabethan theatre storytelling. Condensed information, superbly investigated yet essential, forever to be cherished — thanks to the power of narration, into the memory of small and big generations.

This is one adorable fresco, Shakespeare a merenda (2016), signed, directed, and interpreted by Elena Russo Arman, and splendidly portrayed in a gallery of tableaux vivants, complete with feather duster, sceptre of a minor queen who is much informed of all the folds registered in a history that lives itself in the art of theatre. Precise, yet creative, La Vie en Rose lives in her creativeness with the `mille capinere` song, and she accurately tells the truth about theatre as better one couldn’t: `A magnificent fiction exhibiting a reality truer than truth, whilst the effects on the audience are surprising`. This is the beauty of it!

Mary! Silly girl!
Remember! This is The Globe
The biggest theatre in London
There are no old shows here
Only new audiences

She dreams, Mary, in Mr Goodwin’s dressing room, and she keeps herself busy while she awaits for the signal, a fanfare, and when it comes, rapid she slides on the other side of the little curtain…

Nothing less than a precious cameo, becoming `a natural born Shakespearian actor` at the height of his career. `The Tempest`, last on stage 2019, now in streaming on the Elfo-Puccini website, is a gracious window on a wise, poetic soul, well-informed about himself, and his life as a performer. A one-man show tailor-made for Ferdinando Bruni — founder member of storied Teatro dell’Elfo, from the co-authorship pen of Francesco Frongia. Pouring out of an intimate recounting, this short, yet intense version of `the last tale`, leans on specific predilections as a theatrical concerto, in and about the original plot, to act as an aesthetic statement gem, a gift from an actor to his audience as a tribute to life.

In little more than an hour, alone on stage, with just a couple of extra `island servants`, all the characters parade as a fictional court by the hands of Prospero the wizard-master-father-player. Shipwreck discloses the whimsical `pirate of destinies`, — in a torn stovepipe hat, brown Elizabethan collar, dark frayed coat-gown, diverting his and his daughter’s life on a white sand island — memories of old shores popping out from a distant past, smooth branches scaffolding light drapes. White sand canvases, where animated figures come to life on stage through different voices, accents, and a perfect `soundtrack` — as if inherent part of the dramaturgical `arrangement`.

Books surround a wooden stage-on-the-stage — those same books whose main sin was to have diverted attention from power, thus easing a brother takeover. On this set-in-the-set, Miranda is cuddled as a doll, before turning into an oneiric figure, Japanese Bunraku-like marionette, made up assembling recovered materials. Similar semblance is reserved for Ferdinando, while engaged into the capricious ordeal, before the final blessings. Same goes for the skull masked Alonso-Gonzago and Antonio-Sebastiano pairs, in a carousel of intrigues directed on stage as in a Días de los muertos setting — an anticipation of the final forgiveness which is here son of the fear of death.

Glove puppets are instead reserved both for Ariel — or the `aerial Genius`, who is the guardian of life itself in Prospero’s magic, here conceived as an all white transparent fabric plot and a tiny head in a Pulcinella-like hat, and his opposite, the deformed, half-human, devilish Caliban, an alluring Mamuthones mask, changing dimensions depending on his presence in each line. Therefore, big in the encounter with Stefàno and Trincùlo, whose hilarious Salentinian accent brings about some show-into-the-show made of a liquor-induced obscene score. Gracious, on the other hand, is the heart-rending closure, whilst the old man who has let his `spirit` and his magic go, thanks his public for understanding. 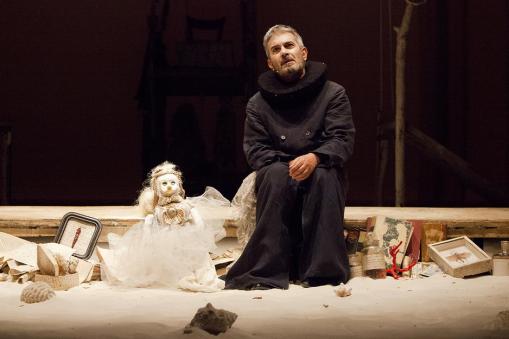 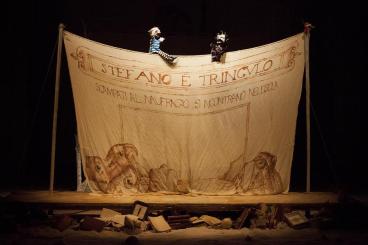 Liberate the Poet!
Shakespeare at Home
Monumental or not?
Tea time with Shakespeare
A `danse macabre`
A ghost is a ghost is a ghost
Farewell, aerial Genius
A vintage `dream`
Fashionable, in black and dust
A chorus of `errands`
Amleto take away
Macbettu
False Hamlet
A not-so-global `O`
Enters, Valda
A Ginger English King
The Mysteries of Love