Let’s say someone had blindfolded me, and accommodated me in a reserved top-tier. Lights off in the theatre, and all set on stage, once unblinded, Alessandro Serra’s Macbettu — for Sardegna Teatro, would immediately reveal to me its being an unmissable theatrical event. Mastery in lightning design, a wide, almost operatic, ‘abundant emptiness’, soon discloses the sense of a deep investigation.

The seeds of a project of international scale, are to be found in a photo feature in the course of a Sardinian carnivalesque seven days held in Barbagia. Cortèges of ‘witches, lunatics, custodians, and victims’, horns, goat bells, antique instruments made of animal skin, hooded tunics dressed men, resentful, and desperate gazes for the infertility of the ground. ‘Carrasecare’, after all, holds in its name a tragic, and mourning taste — ‘meat to be torn’.

«Those men, — explains the director, impressed me for their powerful gestures, and voices. For the closeness, and familiarity they seem to have with Dionysus, while at the same time for the extreme formal precision in their dances, and chants». Seemingly, an anthropological set of habits fitting to a tee, what he was looking for in order to produce his personal version of Macbeth. Sullen cloaks. Red wine. The attempt to domesticate Nature. Mostly, though, a somber wintertime.

The director believes his interest for the Scottish character comes from his being, as Emil Cioran would say, a great thinker, in some way as Hamlet might be considered to be. Besides the circumstances, — «he states something of a devastating profundity. Life is just a walking shadow. Macbeth cannot help but plan for the future, again, and again, tomorrow… Impossible for him to live in the present so much is he projected forward».

Four heavy iron slabs are vertically settled in the middle of the scene, loud noises from behind. Three iconic old hags, — as in ‘befanas’ crones, declare, almost hilariously, the superstitious lines. The plot is therefore set in motion, and true to the purest Elizabethan decree, men only will deliver it on. Not in a ‘translated’ Shakespearean language, but in a precise dialect that is intentionally chosen in order not to fall into a plain literary practice.

The essential scene — although full of performative mastery, holds signs of primordial, feral forces: blood, hostile as in ‘warlike’ postures, dry soil, dust, irregular pointed stones, — weapons in essence, trees’ barks, cork. The latter not being intended to vehicle some sort of ancient residual Nuragic civilisation, but rather to share a set of inner emotional elements aimed to establish a communication with the receiver of a message that is beyond time, and space.

The impatient character, unable to bear the supernatural, so much empty of Love as he is, irresistibly turns into the (co)-author of such a horrendous, as much as useless evil act. Proportions seem to be a rather meaningful semantic trait here. Small as Macbettu! is, — repeatedly yelled with a strong accent, although not as in an ambition igniting ‘hail’, but rather as in a child cherishing call.

Leader of a horde of warriors that are boars in essence manifesting their animal nature, on all fours in the course of an oinking banquet, Lady Macbeth supervises from above. Impeccably incarnated by Fulvio Accogli with his long hair, ephebic ‘allure’ despite a beard — she is a much taller commander than the ‘fake’ king himself, seating on his minuscule throne, almost a baby seat defended only by spear pointy backrests.

Each scene is an artistic frame. Impossible to say which one is the most beautiful.
The splendid parade of the tribal chiefs wearing man-shaped cork’s masks, won by Nature refusing do be domesticated. Unique, yet, and quite possibly unreachable in intensity, the superbly uncanny and mellow death of the ‘fake’ queen. ‘What’s done is done and cannot be undone’. Lightly, almost floating on the floor, a transgendered levity, magnificent in nudity, she will reach a scaffold of her choice, and let her loveless self, go. 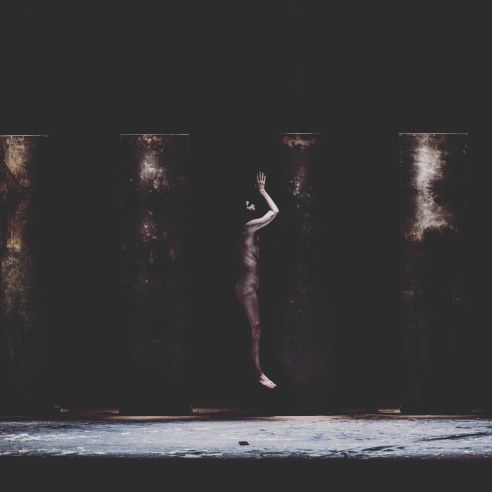 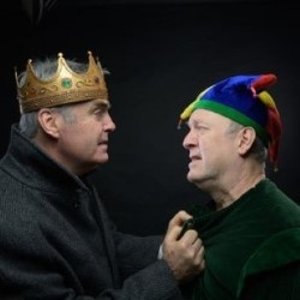